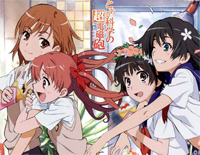 Free Onee-sama... piano sheet music is provided for you. So if you like it, just download it here. Enjoy It!

Onee-sama... (お姉さま…) is an original soundtrack for A Certain Scientific Railgun.

A Certain Scientific Railgun (とある科学の超電磁砲（レールガン） Toaru Kagaku no Rērugan) is a Japanese manga series written by Kazuma Kamachi and illustrated by Motoi Fuyukawa, which began serialization in the April 2007 issue of ASCII Media Works'Dengeki Daioh magazine. The manga is a spin-off of Kamachi's A Certain Magical Index light novel series, taking place before and during the events of that series. The manga is licensed in North America by Seven Seas Entertainment, who began publishing the series from June 2011. An anime television series adaptation by J.C. Staff aired in Japan between October 2009 and March 2010, followed by an original video animation released in October 2010. A second season titled A Certain Scientific Railgun S aired between April and September 2013. The anime are licensed in North America by Funimation.