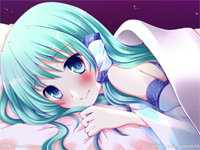 Free Last Night, Good Night piano sheet music is provided for you. So if you like it, just download it here. Enjoy It!

Last Night, Good Night
is is a song by kz, of the doujin circle livetune, featuring Hatsune Miku. Its official Niconico upload has over one million views.

The song is about loving someone before and after sleep, being the last encounter for that person. In the evening, you dream of the person you want to be with, and in the morning you hope to see that person again. Though conveying the feelings can't be done, remembering the person keeps them alive in you.

"Last Night, Good Night" is featured on the albums Re:package, Approach to Zero, and 初音ミクベスト ～impacts～. An extended and remastered version of the song is on the albums Re:Dial, Re:Upload, and Hatsune Miku "Magical Mirai 2014" Official Album. Re:MIKUS contains a remix by Mixbeat feat. Rapbeat, and several other mixes of the song are on the album Dissolve Miku Slowly In Waveform. Zaneeds #US features a cover of the song by Kagamine Rin.

A reprint of the video on MikuHatsuneWatcher's YouTube channel has reached over four million views.