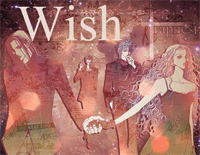 Free Wish piano sheet music is provided for you. So if you like it, just download it here. Enjoy It!

Wish was used as the second opening theme for the Nana anime. Nana (ナナ) is a Japanese shōjo manga series written and illustrated by Ai Yazawa, serialized in Cookie published by Shueisha. The manga has also been adapted into a highly successful live-action filmwith a sequel released on December 9, 2006, and an anime adaptation that premiered on April 5, 2006. The anime adaptation has subsequently been announced as licensed for release in North America by Viz Media. Funimation got the broadcast rights to Viz Media's dub and it premiered on the Funimation Channel on September 19, 2009.