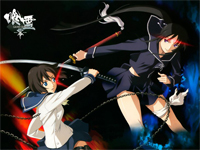 Free Paradise Lost piano sheet music is provided for you. So if you like it, just download it here. Enjoy It!

Paradise Lost is the fifth CD single by Minori Chihara. Minori Chihara is a Japanese voice actress and singer who has had roles in several anime series.

And Paradise Lost was used as the opening theme song to the anime Ga-rei -Zero- in which she voices the main character Kagura Tsuchimiya. Subsequently in the 6th episode of The Melancholy of Haruhi Suzumiya-chan, the character Yuki Nagato (reprised by Minori Chihara herself) sang a muted version of Paradise Lostat the end of the episode. The single placed 15th on the Oricon charts in the month it debuted.