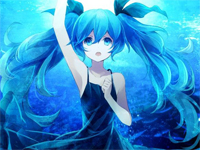 Free Erekutorikku Rabu piano sheet music is provided for you. So if you like it, just download it here. Enjoy It!

Erekutorikku Rabu is a song performed by Hatsune Miku. Hatsune Miku (初音ミク), codenamed CV01, is a Japanese VOCALOID developed and distributed by Crypton Future Media, Inc., and was initially released in August 2007 for the VOCALOID2 engine. She is part of theCharacter Vocal Series and is a Character Voice Vocaloid. There has since been numerous installments such as additional voice banks dubbed 'Append', as well as an upgrade to the VOCALOID3 engine, which includes her long awaited English vocal release. She was the first release for Crypton's VOCALOID Character Vocal Series, the third Japanese VOCALOID, and the seventh VOCALOID to have been created overall. She is considered the most popular and well known VOCALOID and the first to become a pop idol.

And Erekutorikku Rabu was first uploaded to Niconico on December 15, 2009. With over 300,000 views, it is one of Hachioji-P's most popular songs. It is featured on an album of the same name, and is included in Vocaloid-P Data Series vol. 1. Additionally, the album Electric Love Collection consists entirely of remixes of it.