Ray-Bump of Chicken and Hatsune Miku 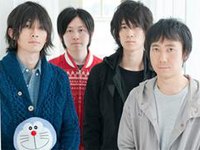 Free Ray piano sheet music is provided for you. So if you like it, just download it here. Enjoy It!

Ray
is a song by Japanese rock band BUMP OF CHICKEN. It was released in two versions; the first, solely featuring the band, was uploaded to YouTube on March 6, 2014. The band had used new approaches when developing the song's lyrics, melody and arrangement, and in an effort to present the song in a more unconventional and progressive way than usual; thus, six days later, an alternate version of the song featuring Hatsune Miku was released. It reached one million views within three days.

Crypton Future Media, Inc. created the system for filming and recording the song PV, and also built a new 3D model of Miku, titled the 14 Model. The music video for Ray was filmed in real time, without any CG added during post-production. Prior to the release of the song and PV, Crypton uploaded a making-of video to its HatsuneMiku channel. A second behind-the-scenes video was released on March 13.

Atsunori Toshi (A4A), the video director, had previously worked on Miku's footage for the VOCALOID opera "The End", in addition to a collaboration between Hatsune Miku and Louis Vuitton. Miku's tuning was carried out by kz, a veteran Vocaloid producer. kz has become infamous among some fan circles because of his heavy reliance on autotune and his general lack of tuning skills, but he was likely chosen for the project because he and Bump of Chicken are signed to the same label, Toy's Factory.