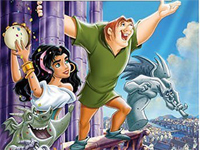 Free God Help The Outcasts piano sheet music is provided for you. So if you like it, just download it here. Enjoy It!

God Help the Outcasts is a song written by composer Alan Menken and lyricist Stephen Schwartz for Walt Disney Pictures' 34th animated feature film, The Hunchback of Notre Dame (1996). A somber Broadway musical-inspired pop power ballad, "God Help the Outcasts" was recorded by American singer Heidi Mollenhauer as the singing voice of Esmeralda on American actress Demi Moore's behalf, while Moore provided the character's speaking voice. A prayer, "God Help the Outcasts" is a spiritualhymn in which Esmeralda, upon claiming the Notre-Dame Cathedral as sanctuary, asks God to protect her people, the gypsies, and shield them from discrimination, racism and persecution at the hands Judge Claude Frollo.

A quiet song about faith, "God Help the Outcasts" additionally establishes the sensual Esmeralda as a selfless, empathetic character, and a Christian, with whom Quasimodo ultimately falls in love. After songwriters Menken and Schwartz wrote "God Help the Outcasts," directors Kirk Wise and Gary Trousdale and Disney CEO Jeffrey Katzenberg debated whether or not the sequence called for a bigger, more powerful song. Subsequently, Menken and Schwartz wrote the more inspirational "Someday" at Katzenberg's insistence. Ultimately, however, the filmmakers decided that "God Help the Outcasts," a religious ballad, better suited the scene, set in a cathedral.

American singer Bette Midler recorded a pop version of "God Help the Outcasts" for the film's soundtrack. "God Help the Outcasts" has garnered generally positive reviews from both film and music critics, who praised the song's lyrics and music, as well as Mollenhauer's performance. Others, however, felt that the song was too sentimental and overwrought, specifically Midler's rendition. In

The Lyrics of God Help The Outcasts:

Yes, I know I'm just an outcast
I shouldn't speak to You
Still I see Your face and wonder
Were You once an outcast too?

I don't know if there's a reason
Why some are blessed, some not
Why the few You seem to favor
They fear us, flee us, try not to see us

God help the outcasts
The tattered, the torn
Seeking an answer
To why they were born