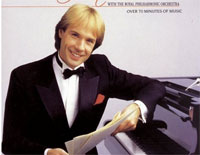 Ballade pour Adeline (French for "Ballad for Adeline") is a 1976 instrumental composed by Paul de Senneville and Olivier Toussaint. Paul de Senneville composed the piece as a tribute to his newborn daughter, Adeline. The first recording was by Richard Clayderman and world-wide sales now have reached 22 million copies in 38 countries. This ballade was also played as the theme piece of a Filipino program on the GMA Network from 1980 to 1996 Lovingly Yours, Helen, hosted by the late Helen Vela, and is featured in the final scene of Gayniggers from Outer Space.

Richard Clayderman performed a duet of the track with guitarist Francis Goya in 1999. Again this recording used the original backing track.

A new version of this piece was released on the Richard Clayderman studio album 'A Thousand Winds' in 2007 to celebrate 30 years since the original release of 'Ballade Pour Adeline'. Richard was accompanied by a new string arrangement by Olivier Toussaint.

Then if you like this music, download the Ballade pour Adeline sheet music now. Just Enjoy It!