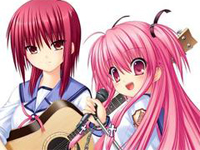 Free Umaretate no Kaze piano sheet music is provided for you. So if you like it, just download it here. Enjoy It!

Umaretate no Kaze (生まれたての風 A Newborn Wind) is used as an original soundtrack to Kanon.

Kanon is a visual novel developed by Key and published by Visual Art's in 1999. The story follows Yuichi Aizawa, who has returned to the town where seven years ago he would spend his school vacations, but has forgotten many of the details regarding his previous visits. Over the course of the series, Yuichi slowly regains these memories as he meets new friends and is reacquainted with others from his past. It was adapted by Toei Animation into a 13-episode anime television series broadcast in 2002 along with an accompanying original video animation episode released in 2003, both directed by Takamichi Itō with music direction by Hiroyuki Kōzu. Kyoto Animation also adapted it into a 24-episode anime television series broadcast between 2006 and 2007 directed by Tatsuya Ishihara.

And Umaretate no Kaze is composed by Shinji Orito who is a Japanese musical composer originally from Hyōgo, Japanworking for the software company Key.