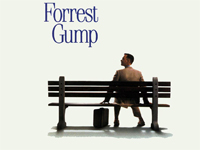 Free Forrest Gump piano sheet music is provided for you. So if you like it, just download it here. Enjoy It!

Forrest Gump is used as an original soundtrack to the film of the same name.

Forrest Gump is a 1994 American epic romantic comedy-drama film based on the 1986 novel of the same name by Winston Groom. The film was directed by Robert Zemeckis and starred Tom Hanks, Robin Wright, Gary Sinise and Sally Field. The story depicts several decades in the life of Forrest Gump, a naïve and slow-witted yet athletically prodigious native of Alabama who witnesses, and in some cases influences, some of the defining events of the latter half of the 20th century in the United States; more specifically, the period between Forrest's birth in 1944 and 1982.

And the song of Forrest Gump is composed and conducted by Alan Silvestri who is an American composer and conductor who works primarily in film and television.