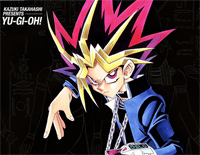 Free Passionate Duelists piano sheet music is provided for you. So if you like it, just download it here. Enjoy It!

"Passionate Duelists" is played in Yu-Gi-Oh! 3D Bonds Beyond Time when Yugi, Jaden and Yusei prepare to face Paradox and during Yugi's turn.

Yu-Gi-Oh!, known in Japan as Yu-Gi-Oh! Duel Monsters (遊☆戯☆王デュエルモンスターズ Yūgiō Dyueru Monsutāzu), is a television anime series produced by Nihon Ad Systems and Studio Gallop, based on the Yu-Gi-Oh! manga series written byKazuki Takahashi. It is the second anime adaptation of the manga following the 1998 TV anime series produced by Toei Animation, adapting the manga from the Duelist Kingdom arc onwards. Like the manga and original anime, this series revolves around a boy named Yugi Mutou, who faces various opponents in various games, mostly a game known as Duel Monsters.