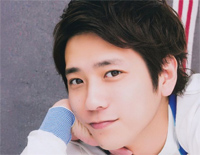 Free Niji piano sheet music is provided for you. So if you like it, just download it here. Enjoy It!

Niji
(虹, "Rainbow") is a song by Kazunari Ninomiya who is a Japanese idol,singer, songwriter, actor, voice actor and radio host. He is a member of Japanese boy band Arashi and is best known to movie audiences for his portrayal as Private Saigo in the 2006 Clint Eastwood war film Letters from Iwo Jima.