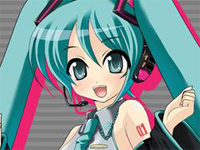 Free Rain Stops, Good-bye piano sheet music is provided for you. So if you like it, just download it here. Enjoy It!

Rain Stops, Good-bye
is a song by Hatsune Miku.

Hatsune Miku (初音ミク), sometimes referred to as Miku Hatsune, is a humanoid personavoiced by a singing synthesizer application developed by Crypton Future Media, headquartered in Sapporo city. She uses Yamaha Corporation's Vocaloid 2 and Vocaloid 3 singing synthesizing technologies. She also uses Crypton Future Media's Piapro Studio, a singing synthesizer VSTi Plugin. She was the second Vocaloid sold using the Vocaloid 2 engine, and the first Japanese Vocaloid to use the Japanese version of the Vocaloid 2 engine. Her voice is sampled from Japanese voice actress Saki Fujita. Hatsune Miku has performed at her concerts onstage as an animated projection. Hatsune Miku is portrayed to be a 16-year-old girl with long turquoise pigtails.