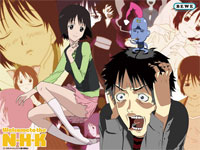 Free Modokashii Sekai no Ue de piano sheet music is provided for you. So if you like it, just download it here. Enjoy It!

Modokashii Sekai no Ue de (もどかしい世界の上で, lit. "On Top of a Frustrating World") is the second ending theme used for episodes thirteen through twenty-four of Welcome to the N.H.K..

Welcome to the N.H.K. (N・H・Kにようこそ! N.H.K. ni Yōkoso!) is a Japanese novel written by Tatsuhiko Takimoto, with a cover illustration by Yoshitoshi ABe, and was published by Kadokawa Shoten in Japan on January 28, 2002. A 24-episode anime adaptation produced by Gonzo and directed by Yusuke Yamamoto aired in Japan between July 9 and December 17, 2006 on Chiba TV and on later dates on other JAITS stations.

And Modokashii Sekai no Ue de was written and composed by Yugo Sasakura, arranged by Masanori Shimada, and performed by Yui Makino.