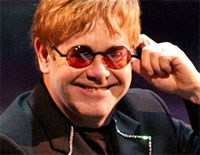 Free Nikita piano sheet music is provided for you. So if you like it, just download it here. Enjoy It!

Nikita is a song by English singer Elton John about the Cold War from his 1985 album Ice on Fire. Released late in the year, the song was successful in many countries and was a top ten hit in almost all of them.

The video for the song "Nikita", directed by Ken Russell, featured Anya Major in the role of Nikita and a cameo appearance by Justin Lewis. Russell says he didn't realize that Nikita was a man's name in the Russian language (e.g. Nikita Khrushchev) and Elton John accepted the proposed script written by Russell which was a male-female love interpretation of the song, as indeed the depicted East German border guard in the video is a beautiful blonde woman with short hair.

Meanwhile, we also offer Sorry Seems to Be the Hardest Word-Elton John sheet music for you to download

The Lyrics of Nikita:

Oh Nikita You will never know anything about my home
I'll never know how good it feels to hold you
Nikita I need you so
Oh Nikita is the other side of any given line in time
Counting ten tin soldiers in a row
Oh no, Nikita you'll never know