An die Freude-Ode to Joy 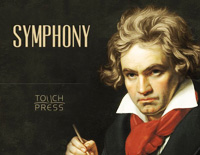 An die Freude-Ode to Joy Introduction

Free An die Freude piano sheet music is provided for you. So if you like it, just download it here. Enjoy It!

An die Freude
, also known as Ode to Joy, is an ode written by German poet Friedrich Schiller and is best known for its use by Ludwig van Beethoven in the final movement of his Ninth Symphony.

Over the years, Beethoven's "Ode to Joy" has remained a protest anthem and a celebration of music. From demonstrators in Chile singing during demonstration against the Pinochet dictatorship, Chinese student broadcast at Tiananmen Square, the concert conducted by Leonard Bernstein after the fall of the Berlin Wall and Daiku concerts in Japan every December and one after the 2011 tsunami. It has recently inspired flashmob performances at public spaces by musicians in many countries worldwide, including Choir Without Borders's 2009 performance at a train station in Leipzig, Germany, to mark the 20th and 25th anniversary of the Fall of the Berlin Wall, Hong Kong Festival Orchestra's 2013 performance at a Hong Kong mall, and performance in Sabadell, Spain. A 2013 documentary, Following the Ninth, directed by Kerry Candaele, follows its continuing popularity.

Meanwhile, we also offer different version of Ode to Joy Me sheet music for you to download