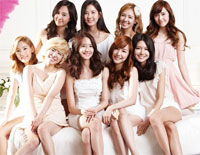 Free Mr.Mr. piano sheet music is provided for you. So if you like it, just download it here. Enjoy It!

Mr.Mr. is a Korean-language song by South Korean girl group Girls' Generation, released on February 28, 2014, as the title track from their fourth Korean EP, Mr.Mr.. The song was produced by American production team The Underdogs.

Mr.Mr. is an electropop dance song with a R&B sound, produced by The Underdogs, who also worked with Beyoncé, Justin Timberlake, and Chris Brown.

A Japanese version of Mr.Mr. was released on March 21, 2014. No Japanese music video has been announced. The track will be included in their First Japanese compilation album "The Best" to be released on July 23, 2014.