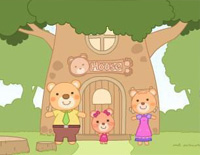 Three Bears numbered musical notation and stave are corresponding completely, which is the specified track for EOP Demon Training Camp and also suitable for his members to practice!

Three Bears is used as an insert song for 2004 South Korean television series Full House starring Song Hye-kyo, Rain, Han Eun-jung and Kim Sung-soo. Based on the manhwa Full House by Won Soo-yeon (not based on the American sitcom of the same name), the romantic comedy series aired on KBS2 from July 14 to September 4, 2004 on Wednesdays and Thursdays at 21:50 for 16 episodes. And Three Bears is a children's song which has the lively melody and is loved by lots of people.