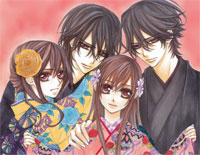 Free Still Doll piano sheet music is provided for you. So if you like it, just download it here. Enjoy It!

Still Doll is used as the ending theme to the first season of the anime Vampire Knight. Vampire Knight (ヴァンパイア騎士 Vanpaia Naito) is a shōjo manga series written by Matsuri Hino. Two drama CDs were created for the series, as well as a twenty-six episode anime adaptation. Produced by Studio Deen, the anime series' first season aired in Japan on TV Tokyo between April 8, 2008 and July 1, 2008. The second season, aired on the same station from October 7, 2008 and December 30, 2008. The anime uses many of the same voice actors as were used for the drama CDs. The anime adaptations were licensed for release in North America by Viz Media, the DVD released on July 20, 2010.

And Kanon Wakeshima performs the ending theme, "Still Doll". Kanon Wakeshima is a Japanese singer and cellist. Originally produced by musician and fashion designer Mana, Wakeshima debuted under the DefStar Records label on May 28, 2008.