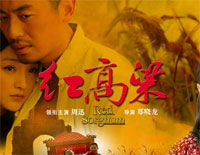 }
Free Jiu'er piano sheet music is provided for you. So if you like it, just download it here. Enjoy It!

Jiu'er is used as the ending theme song for Chinese television series Red Sorghum. The series was based on Nobel laureate Mo Yan's 1986/1987 eponymous novel. Directed by Zheng Xiaolong, it also features the highly anticipated return of actress Zhou Xun to television after 10 years.

And Jiu'er is sung by Han Hong, a Chinese singer and songwriter of ethnic Tibetan and Han Chinese origin. She has been a judge on Chinese Idol since 2013.
[ + More Information ]