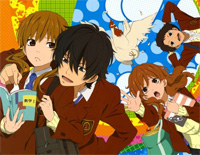 Free Q&A Recital piano sheet music is provided for you. So if you like it, just download it here. Enjoy It!

Q&A Recital! (Q&Aリサイタル！) is used as the opening theme to the anime My Little Monster.

My Little Monster (となりの怪物くん Tonari no Kaibutsu-kun, lit. "The Monster Sitting Beside Me") is a Japanese mangawritten and illustrated by Robico about the relationship between a girl named Shizuku Mizutani and a boy named Haru. It was serialized in Kodansha's Dessert magazine from August 23, 2008, to June 24, 2013. An anime adaptation by Brain's Base aired from October 1 to December 24, 2012. It was also simulcast on Crunchyroll.

And Q&A Recital! is sung by Haruka Tomatsu who is a Japanese voice actress and singer, employed by Music Ray'n (a Sony Music Entertainment Japan company).