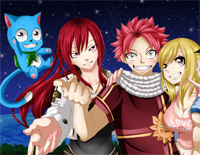 Free Masayume Chasing piano sheet music is provided for you. So if you like it, just download it here. Enjoy It!

Masayume Chasing
is used as the opening theme to the anime Fairy Tail. Fairy Tail (フェアリーテイル Fearī Teiru) is a Japanese manga series written and illustrated by Hiro Mashima. The chapters have been adapted into an anime series produced by A-1 Pictures and Satelight, which began broadcasting in Japan in 2009. Additionally, A-1 Pictures and Satelight have developed six original video animations and an animated feature film, Fairy Tail the Movie: Phoenix Priestess. The series ended on March 30, 2013. However, on March 4, Mashima announced on his Twitter account that the anime would not end yet, and that reruns of the anime will begin airing on TV Tokyo under the title Fairy Tail Best! on April 4, 2013. On July 11, Mashima announced the green lighting of a sequel series of the anime. The new series premiered on TV Tokyo on April 5, 2014.