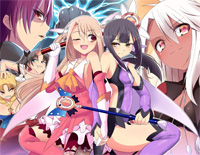 Free Starlog piano sheet music is provided for you. So if you like it, just download it here. Enjoy It!

Starlog is used as the opening theme to the anime Fate/kaleid liner Prisma Illya.