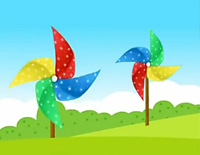 Big Pinwheel actually is a Children's Program which has a very high audience rating and reputation. This program was shown June 1, 1995 and got the first prize for excellent column for many times.

Besides, Big Pinwheel's target is mainly 3-14 years old. It not only increased the children's opportunities for involvement in TV show but also was much closer to the children, so it is endorsed by most young people.

At the same time, its theme song of the same name Big Pinwheel was more and more popular.

For children who are looking for Big Pinwheel stave, you can just download it now!