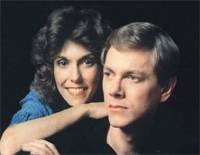 Free Yesterday Once More piano sheet music is provided for you. So if you like it, just download it here. Enjoy It!

Yesterday Once More
is a hit song by The Carpenters from their 1973 album Now & Then. Composed in the key of E, the song features a long middle section, consisting of eight covers of 1960s tunes incorporated into a faux oldies radio program. The work takes up the entire side B of the album.

Dionne Warwick, a close friend of The Carpenters, performed the song live in Las Vegas the night before Karen Carpenter's death in 1983.

Meanwhile, we also offer different version of Yesterday Once More sheet music for you to download

The Lyrics of Yesterday Once More:

when i was young i'd listen to the radio
waiting for my favorite songs
when they played i'd sing along,
it make me smile.
those were such happy times and not so long ago
how i wondered where they'd gone.
but they're back again just like a long lost friend
all the songs i love so well.
every shalala every wo'wo
still shines.
every shing-a-ling-a-ling
that they're starting
to sing so fine

when they get to the part
where he's breaking her heart
it can really make me cry
just like before.
it's yesterday once more.
(shoobie do lang lang)
looking bak on how it was in years gone by
and the good times that had
makes today seem rather sad,
so much has changed.

it was songs of love that i would sing to them
and i'd memorise each word.
those old melodies still sound so good to me
as they melt the years away
every shalala every wo'wo still shines

every shing-a-ling-a-ling
that they're startingto sing
so fine
all my best memorise come back clearly to me
some can even make me cry
just like before.
it's yesterday once more.
(shoobie do lang lang)
every shalala every wo'wo still shines.

every shing-a-ling-a-ling
that they're starting to sing
so fine
every shalala every wo'wo still shines.