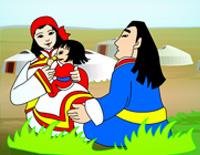 Lucky Treasures (Chinese title: Jixiang sanbao) was created by Buren Bayaer who is a singer, composer and journalist in China. He is an Inner Mongolian and comes probably from Hulunbuir.

Lucky Treasures, written in 1994, has become very popular in China in recent years. Bayaer and his wife Wurina are also directors of the Hulunbeier Children's Choir, from which comes young singer Uudam. He's an adoptive son of Buren and Wurina. They have also a daughter Norma, who is a known singer in China.

The song, Lucky Treasures, is originally sung in Mongolian, although another version sung in Mandarin Chinese has been released afterwards.

With the popularity of this song, Lucky Treasures stave is more and more needed, here we provide a simply one, hope you like it.