With You With Me-Magi The Labyrinth of Magic ED2 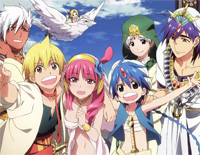 With You With Me-Magi The Labyrinth of Magic ED2 Introduction

Free With You/With Me piano sheet music is provided for you. So if you like it, just download it here. Enjoy It!

With You/With Me is used as the ending theme to the anime Magi: The Labyrinth of Magic. Magi: The Labyrinth of Magic (Japanese: マギ) is a Japanese manga series written and illustrated by Shinobu Ohtaka. A television anime adaptation by A-1 Pictures aired in Japan from October 2012 to March 2013 and a second season titledMagi: The Kingdom of Magic aired from October 2013 to March 2014. The manga is being released in North America by Viz Media, while the anime has been licensed by Aniplex of America in North America, by Viz Media Europe in Europe and by Madman Entertainment in Australia. An original video animation based on Adventure of Sinbad is also in production.