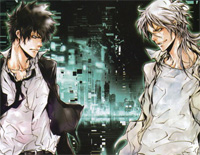 Free Abnormalize piano sheet music is provided for you. So if you like it, just download it here. Enjoy It!

Abnormalize is used as the first opening theme to the anime Psycho-Pass. Psycho-Pass (Japanese: サイコパス Hepburn: Saiko Pasu) is a Japanese anime television series that was produced by Production I.G, directed by Naoyoshi Shiotani and written by Gen Urobuchi. The series was aired on Fuji TV's Noitaminaprogramming block between October 2012 and March 2013. The story takes place in an authoritarian future dystopia, where omnipresent public sensors continuously scan the Psycho-Pass of every citizen in range. The sensors measure mental state, personality, and the probability that the citizen will commit crimes, alerting authorities when someone exceeds accepted norms. To enforce order, the officers of the Public Safety Bureau carry hand weapons called Dominators. The story follows Akane Tsunemori, Shinya Kogami, and other members of Unit One of the Public Safety Bureau's Criminal Investigation Division, and the crimes they investigate using Dominators.