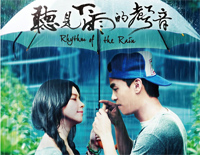 Free Rythm of the Rain piano sheet music is provided for you. So if you like it, just download it here. Enjoy It!

Rythm of the Rain
is used as the theme song for the film with the same name. And the song was sung by Jay Chou who is a Taiwanese musician, singer-songwriter, multi-instrumentalist, actor and director.

Chou's compositions are loosely categorized as pop music. While many of his works fall into contemporary R&B,rap, and rock genres, the term "Chou Style" (Chinese: 周氏風格; pinyin: zhōu shì fēnggé) has been popularized to describe his trademark cross-cultural music and his insistence on singing with slurred enunciation. He regularly fuses traditional Chinese instruments and styles with R&B or rock to form a new genre called "Zhongguo feng" (simplified Chinese: 中国风; traditional Chinese: 中國風; pinyin: Zhōngguó fēng), which literally means "Chinese Style Music", some of which are written in the Pentatonic Scale as opposed to the more common seven-note scale (Diatonic Scale) to accentuate an oriental style.