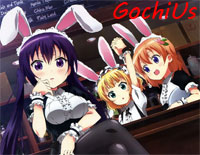 Free Daydream Cafe piano sheet music is provided for you. So if you like it, just download it here. Enjoy It!

Daydream Cafe
is the opening theme from the anime Is the Order a Rabbit. Is the Order a Rabbit? (ご注文はうさぎですか? Gochūmon wa Usagi Desu ka?), also known in short form as GochiUsa (ごちうさ), is a Japanese 4-panel comedy manga series by Koi, serialized in Hōbunsha's seinen manga magazine Manga Time Kirara Max since March 2011. It has been collected in three tankōbon volumes as of March 2014. An anime television series adaptation by White Fox aired in Japan between April and June 2014.