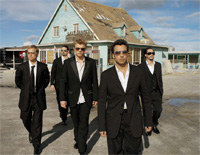 Free Everybody - Backstreet Boys piano sheet music is provided for you. So if you like it, just download it here. Enjoy It!


"Everybody (Backstreet's Back)" is the first single from the Backstreet Boys' second international album Backstreet's Back in 1997, and the fourth single and fourth track from their debut US album in 1998. The US debut was originally released without the song, which references the band's return via their second international album. However, once it was decided to release the single in the US, the album was re-released with "Everybody" included.
[ + More Information ]