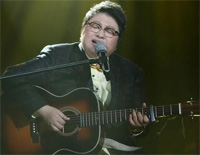 I Am a Singer (Chinese: 我是歌手; pinyin: Wǒ Shì Gēshǒu) is a Chinese version of the Korean reality show I Am a Singer and it is broadcast on Hunan Television. Seven talented, veteran Chinese singers perform for a selected audience, which votes to eliminate one singer after each week's performance. The following week, another singer joins the competition, and the lineup of artists varies throughout the course of the show. The program ended its first season on 12 April 2013, and its second season on 4 April 2014. The third season has started in January 2015.