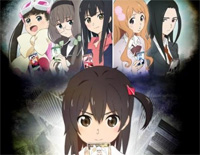 Free World's End, Girl's Rondo piano sheet music is provided for you. So if you like it, just download it here. Enjoy It!

World's End, Girl's Rondo is used as the opening theme to the anime Selector Spread WIXOSS. Selector infected WIXOSS (pronounced "we cross") is a Japanese television anime series produced by J.C.Staff in collaboration with Takara Tomy and Warner Entertainment Japan. The first season premiered in Japan between April and June 2014, with its second season, selector spread WIXOSS, airing from October 4, 2014. Two manga spin-offs have been produced, and a trading card game by Takara Tomy, titled simply WIXOSS, was launched in Japan in April 2014.