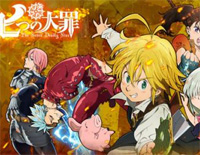 Free Seven Deadly Sins piano sheet music is provided for you. So if you like it, just download it here. Enjoy It!

As of January 2015, The Seven Deadly Sins had sold over 10 million copies. It is currently being adapted into a television anime by A-1 Pictures that debuted on October 5, 2014. The manga has been licensed by Kodansha Comics USA for English publication in North America, while the chapters are released digitally by Crunchyroll in over 170 countries as they are published in Japan.