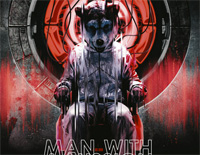 Free Database feat. TAKUMA(10-FEET) piano sheet music is provided for you. So if you like it, just download it here. Enjoy It!

Database feat. TAKUMA(10-FEET) is used as the opening theme to the anime Log Horizon. Log Horizon (ログ・ホライズン Rogu Horaizun) is a Japanese novel series written by Mamare Touno and published by Enterbrain in Japan since 2011. The novel has received four manga adaptations, with one based on the main story and the other three revolving around characters in the series. An anime adaptation aired on NHK Educational TV between October 5, 2013 and March 22, 2014. A second season began airing on October 4, 2014.

And Database feat. TAKUMA(10-FEET) is performed by MAN WITH A MISSION, a Japanese alternative pop band with features of hard rock anddance pop that was formed in 2010 in Shibuya, Japan. They are made up of five band members, with stage names of Tokyo Tanaka (vocals), Kamikaze Boy (bass), Jean-Ken Johnny (guitar), DJ Santa Monica (disc jockey), and Spear Rib (drums).