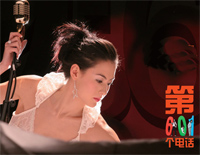 Free Number piano sheet music is provided for you. So if you like it, just download it here. Enjoy It!

Number
is used as the theme song for the film Telephone 601. And it was performed by Bibi Chow from her first studio album Who Touched My Violin String.

Zhou Bichang, also known as Bibi Zhou or Bibi Chow, is a Chinese singer and songwriter. She was the first runner-up in the 2005 Super Girl Competition, which is a Chinese version of Pop Idol for female contestants only. Her voice has been appropriated as a female version of David Tao, Leehom Wang, and Jay Chou, as she covered some of their songs during the contest.