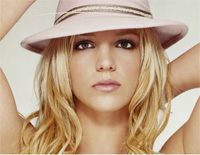 Free Lucky piano sheet music is provided for you. So if you like it, just download it here. Enjoy It!

Lucky is a song recorded by American singer Britney Spears for her second studio album, Oops!... I Did It Again (2000). It was released on August 8, 2000 by Jive Records as the second single of the album. After meeting with producers Max Martin and Rami Yacoub in Sweden, the singer recorded several songs for the album, including "Lucky". Theteen pop and dance-pop song tells a story about a famous movie star named Lucky, who, despite seemingly having it all – fame, wealth, beauty – is truly lonely and unhappy on the inside. It received positive reviews from music critics, who considered its melody and rhythm as sweet and catchy, and noted the lyrics to be about Spears herself.

"Lucky" achieved commercial success worldwide, peaking at number one in Austria, Germany, Sweden and Switzerland, while reaching the top ten in several European countries. In the United Kingdom, the song peaked at number five, and is Spears' tenth best-selling single in the country, having sold over 225,000 copies there. An accompanying music video was directed by Dave Meyers, and portrays Spears as herself and a melancholy movie star Lucky, who just want to have some fun in life. Spears has performed "Lucky" in a number of live appearances and in two of her concert tours.

The Lyrics of Lucky:

This is a story about a girl named Lucky…

Early morning, she wakes up
Knock, knock, knock on the door
It's time for makeup, perfect smile
It's you they're all waiting for
They go…
"Isn't she lovely, this Hollywood girl?"
And they say…

[CHORUS:]
She's so lucky, she's a star
But she cry, cry, cries in her lonely heart, thinking
If there's nothing missing in my life
Then why do these tears come at night

Lost in an image, in a dream
But there's no one there to wake her up
And the world is spinning, and she keeps on winning
But tell me what happens when it stops?
They go…
"Isn't she lovely, this Hollywood girl?"
And they say…

"Best actress, and the winner is…Lucky!"
"I'm Roger Johnson for Pop News standing outside the arena waiting for Lucky"
"Oh my god…here she comes!"

Isn't she lucky, this Hollywood girl?
She is so lucky, but why does she cry?
If there's nothing missing in her life
Why do tears come at night?