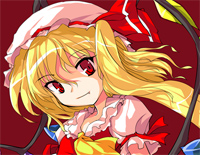 Free U.N. Owen was her piano sheet music is provided for you. So if you like it, just download it here. Enjoy It!

U.N. Owen was her
is a theme song composed by ZUN for the sixth Touhou Project game Touhou Koumakyou ~ the Embodiment of Scarlet Devil that's associated to Flandre Scarlet. His comments on the song imply that it was his favourite during the time of the game.

The theme, along with Flandre's second-to-last spell card (Secret Barrage "And Then Will There Be None?"), are references to Agatha Christie's novel And Then There Were None. In the origin of this incident, the spouse of the person who sent out invitations had the initial "U.N.Owen". As "U.N.Owen" is "Unknown", i.e. an "unknown person", the characters in that story were killed by someone unknown.

That Flandre Scarlet herself does not know the meaning of killing humans or other youkai, so that in a sense she has a cruel (or, in some sense, an innocent) personality which can attributed to the fact she hasn't been in much contact with either one, and that she continues to be locked underground knowing pretty much nothing about the existence of the outside, and other things like this are thought to be the reasons there is a relation between Flandre and U.N.Owen, since ZUN stated that this relates to Flandre being unknown.