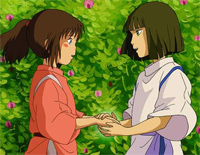 Free Itsumo Nando Demo piano sheet music is provided for you. So if you like it, just download it here. Enjoy It!

Itsumo Nando Demo
(いつも何度でも "Always With Me") is used as the theme song for 2001 Japanese animated fantasy film Spirited Away.

And Itsumo Nando Demo was written and performed by Youmi Kimura, a composer and lyre-player from Osaka. The lyrics were written by Kimura's friend Wakako Kaku. The song was intended to be used for Rin the Chimney Painter (煙突描きのリン Entotsu-kaki no Rin), a different Miyazaki film which was never released. In the special features of Japanese DVD, Hayao Miyazaki explains how the song in fact inspired him to create Spirited Away. The song itself would be recognized as Gold at the 43rd Japan Record Awards.