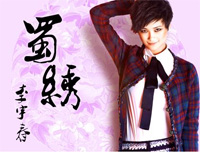 Free Sichuan Embroidery piano sheet music is provided for you. So if you like it, just download it here. Enjoy It!

Sichuan Embroidery is a song by Chinese pop singer and actress Li Yuchun. She achieved fame when she won the nationwide singing contest Super Girl in 2005. She was working with Taihe Rye Music and released her albums: The Queen and the Dream (September 2006) Mine (November 2007) Youth of China (May 2008) "Li Yuchun" 2009) Dancing Young Literati (April 2011) Old If Not Wild (September 2012) . She made her film debut in Bodyguards and Assassins (2009). She gained international fame in November 2013 after winning the 2013 MTV Europe Music Award for Best Worldwide Act.