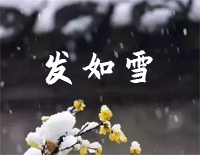 Hair Like Snow is a song from Taiwanese Mandopop artist Jay Chou's sixth Mandarin studio album November's Chopin. The album was released on 1 November 2005 by Alfa Music and distributed by Sony Music Taiwan. It was released with a bonus DVD containing three music videos.

And Hair Like Snow is a "Chinese Wind" piece, utilizing traditional Chinese instruments including the pipa and yangqin, at a moderately slow tempo. This track also involves a typical R&B beat. The vocal is sung softly, and towards the end, a false voice is used (an emphasis on traditional Chinese music). The lyrics are romance-centered, and use metaphoric language to some degree.