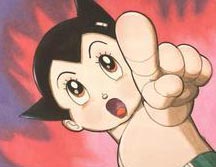 Astro Boy (Mighty Atom or Iron Arm Atom) is a Japanese manga series first published in 1952. The story follows the adventures of a robot named Astro Boy and a selection of other characters along the way.

Astro Boy was adapted into the first popular animated Japanese television series that embodied the aesthetic that later became familiar worldwide as anime. It originated as a manga in 1952 by Osamu Tezuka, revered in Japan as the "God of Manga." After enjoying success abroad, this series was remade in the 1980s as Shin Tetsuwan Atomu, known as Astroboy in other countries, and again in 2003. In November 2007, he was named Japan's envoy for overseas safety. An American computer-animated 3-D film based on the original manga series by Tezuka was released on October 23, 2009.

With the popularity of this series, its theme song, Astro Boy was also loved by more and more children.

Also I have to say that this song is quite suitable for children to play since Astro Boy Stave is very simple. Have a try now!