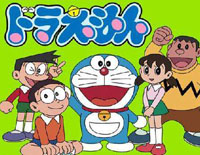 Free Doraemon no Uta piano sheet music is provided for you. So if you like it, just download it here. Enjoy It!

Doraemon no Uta
is used as the opening theme song for the Doraemon anime from 1979 to 2005 on TV Asahi. The lyrics were written by Takumi Kusube and the show was created by Shunsuke Kikuchi. The original singer was Kumiko Osugi.

And Doraemon is a Japanese manga series created by Fujiko Fujio which later became an anime series and an Asian franchise. The series is about an intelligent robotic cat named Doraemon, who travels back in time from the 22nd century to aid a pre-teen boy, Nobita Nobi.

The series first appeared in December 1969, when Doraemon was published simultaneously in six different magazines. In total, 1,344 stories were created in the original series, which are published by Shogakukan under the Tentōmushi manga brand, extending to forty-five volumes. The volumes are collected in the Takaoka Central Library in Toyama, Japan, where Fujiko Fujio was born.

With the popularity of this series, its theme song, Doraemon no Uta was also loved by more and more children.