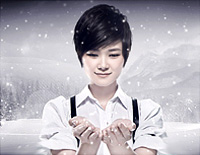 Free Happy Winter piano sheet music is provided for you. So if you like it, just download it here. Enjoy It!

Happy Winter
is a song performed by Li Yuchun, a Chinese pop singer and actress who achieved fame when she won the nationwide singing contest Super Girl in 2005. She gained international fame in November 2013 after winning the 2013 MTV Europe Music Award for Best Worldwide Act.

Her first single was "Sweet Love, I Love You", recorded during the time when she was on Super Girl. She joined Taihe Rye Music in October 2005 and released the single "Happy Winter" as a Christmas gift to her fans. In March 2006, she released "Give Me Five", a Latin-flavored dancing song. Another release, "Happy Wake Up", was the AD song used in her Crest toothpaste. All of these songs were released online by digital distribution, a new move in the Chinese music world. She also released an EP titled "Give Me Five".