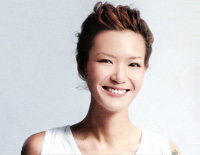 Free Break-Up With Good Intentions piano sheet music is provided for you. So if you like it, just download it here. Enjoy It!

Break-Up With Good Intentions
is a song by Candy Lo, a Canto- rock singer-songwriter and actress from Hong Kong. She has released nine studio albums, over forty singles, two compilations, one live album, and one EP with Sony Music to date. On 11 June, she released her first EP on her new label WOW Music.

And Break-Up With Good Intentions is included in her 6th studio album Seung Mei Yan Gaan. Seung Mei Yan Gaan (賞味人間; Appreciate The Taste Of Life) was released on 7 July 2002. For this album Candy Lo worked together with Hong Kong producer Kubert Leung with whom she had worked on previous albums, such as Fantasy.