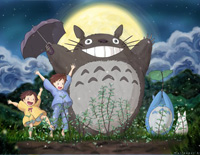 Free Hayao Miyazaki’s Totoro piano sheet music is provided for you. So if you like it, just download it here. Enjoy It!

Hayao Miyazaki’s Totoro
actually is a original music composed by Internet friend. The soothing melody gives people a pleasant feeling. My Neighbor Totoro is a Japanese animated fantasy film written and directed by Hayao Miyazaki. The film was released on VHS and laserdisc in the United States by Tokuma Japan Communications' US subsidiary in 1993 under the title My Friend Totoro. My Neighbor Totoro helped bring Japanese animation into the global spotlight, and set its writer-director Hayao Miyazaki on the road to success. The film's central character, Totoro, is as famous among Japanese children as Winnie-the-Pooh is among British ones.