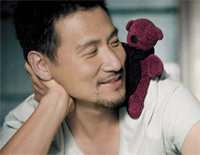 Free Love Scale piano sheet music is provided for you. So if you like it, just download it here. Enjoy It!

Love Scale
is a song performed by Jacky Cheung, a Hong Kong singer-songwriter and actor. With more than 25 million records sold as of 2003, he is regarded as one of the "Four Heavenly Kings" of Hong Kong.

Meanwhile, Love Scale is included in fifth Mandopop album The Goodbye Kiss hich was released on 5 March 1993. The Mandopop album was a great success in the Greater China region. The album sold over 4 million copies in 1993 throughout Asia, including 1,360,000 copies in Taiwan alone, and the album is one of three million-selling Jacky's album there and it still holds record as Taiwan's second-selling album.