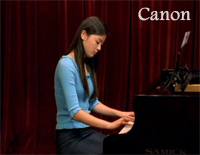 Free Canon Variation Version piano sheet music is provided for you. So if you like it, just download it here. Enjoy It!

Canon
is a piece of insert music from 2001 South Korean romantic comedy film My Sassy Girl. Actually in this movie Jun Ji-hyun played is the variation on Canon which is chosen from George Winston’s Canon in C major.

The film was extremely successful in South Korea and was the highest grossing Korean comedy of all time. When My Sassy Girl was released throughout East Asia, it became a mega blockbuster hit in the entire region, from Japan, China,Taiwan, Hong Kong, as well as Southeast Asia and parts of South Asia, to the point where it was drawing comparisons to Titanic.