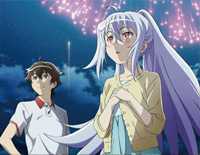 Free Asayake no Starmine piano sheet music is provided for you. So if you like it, just download it here. Enjoy It!

Asayake no Starmine
is used as the ending theme to Japanese anime television series Plastic Memories. The series was produced by Doga Kobo and directed by Yoshiyuki Fujiwara. The story was conceived by Naotaka Hayashi, who also wrote the screenplay, with original character design by Okiura. The series premiered in Japan on April 4, 2015.

And Asayake no Starmine is performed by Asami Imai, a female Japanese singer and voice actress who works for Early Wing.