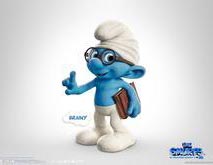 }
Free Lovely Smurfs piano sheet music is provided for you. So if you like it, just download it here. Enjoy It!

Lovely Smurfs was the theme song of The Smurfs, a Belgian comic and television franchise centered on a group of small Smurfs who are small blue fictional creatures that lives in mushroom houses in a forest. The Smurfs was first created and first introduced as a series of comic characters by the Belgian comics artist Peyo (pen name of Pierre Culliford) in 1958. The word "Smurf" is the original Dutch translation of the French "Schtroumpf"; a word invented when during a meal with fellow cartoonist André Franquin, Peyo couldn't remember the word salt.

Over the decades, many singles and albums of Smurf music have been released in different countries and languages, sometimes very successfully, with millions of copies sold. One of the best known is Lovely Smurfs.

Lovely Smurfs was characterized with fast beat and beautiful performance, so it won the love of children. Besides, this song is very simple, which is suitable for children to play.